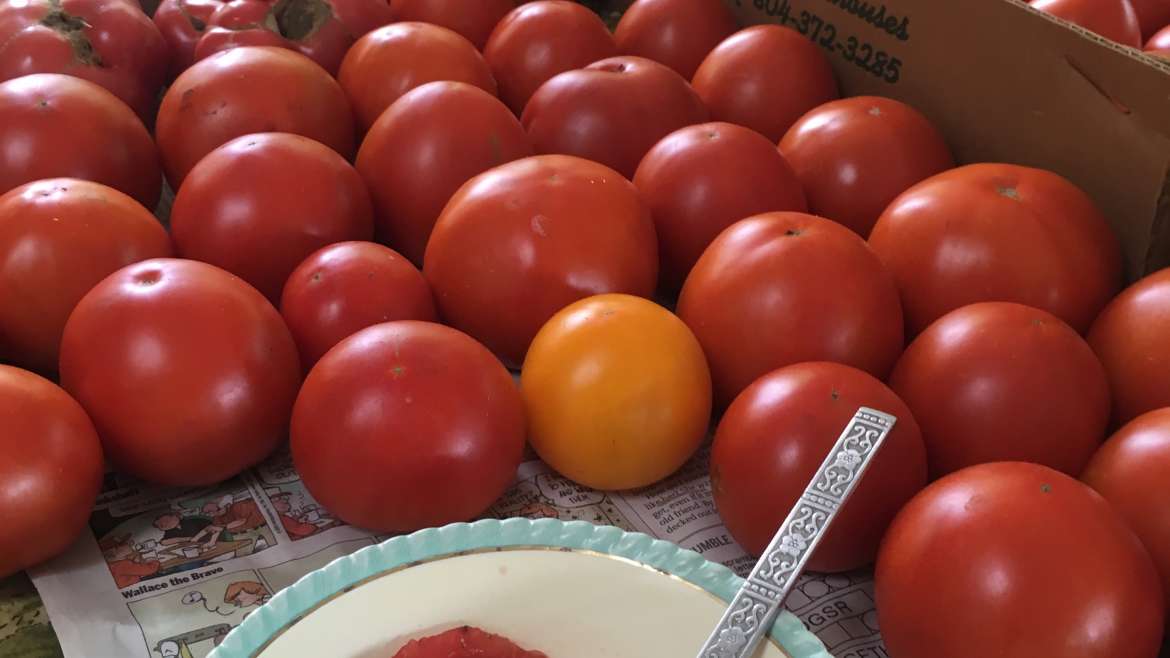 In this “How-to” post, you will find information of the following topics:

Growing Tomatoes in the ground

Let’s take a look at some tomato terminology and what the terms mean.

HYBRID- These are plants that are grown by genetically crossing two plants.  Seeds from these cannot be saved.  They will not produce true in the next generation.  You will end up with low yield and fruit that is not very good.  Hybrids are generally more disease and crack resistant.  They are bred for specific qualities.  Many times taste is sacrificed in order to get a firmer fruit or a longer keeper for example.

HEIRLOOM- These are tomatoes the way nature made them.  You can save the seeds and they will produce the same plant next season.  They are less disease resistant and tend to crack and not keep as well as newer introductions.

DETERMINATE- This refers to the growth habit of the plant. They grow to a specific height and then stop growing.  The fruit ripens all at once. They are good for canning, freezing and drying.

INDETERMINATE- This also refers to the plants growth habit.  The plant’s genes tell it to keep growing.  Normally, these need to be staked or caged, and they continue to bear fruit all summer until frost.

NUMBER OF DAYS- Simply lists the number of days from the time the seed germinates until the fruit matures or starts to ripen.

ORGANIC- These are seeds that are grown under the USDAs NOPL (National Organic Program) standards.

This is just some of the more important terminology used in talking about tomatoes. I receive two catalogs each with hundreds of tomato seeds listed and yet there are many differences between the two listings.  Just an example of how many kinds of seeds are available: Brandywine is a popular heirloom, and there are some 15 to 20 different Brandywines available.

What makes a tomato an heirloom?  Experts generally recognize three categories of heirlooms.  They are commercial, family and created.

The following is a simple explanation of the differences.

COMMERCIAL- These are varieties introduced by seed companies before 1940; some of these are hybrid varieties.  Most purists don’t recognize the hybrids because they are different from their parents. Remember, if they are hybrids, you can’t save their seed.

CREATED HEIRLOOMS- These result from the deliberate crossing of two heirlooms or an heirloom and a hybrid.

A last thought, do not go into a garden center and ask the clerk what type the variety you pick up is.  Most of them don’t know if it’s not on the label. When I was in the business, I didn’t know.  If it wasn’t on the label, I simply did not have time to check out all the different ones. We carried some 60 to 70 varieties during the season.

GROWING TOMATOES IN THE GROUND

The two most important things to consider are location and soil.

First, location. Tomatoes should be grown in as much sun as possible. A minimum of six hours a day of full direct sunlight is necessary.  Most of that should be afternoon, although, all day is much better. With less light you will have more plant, and less fruit.

Next, soil.  You need a good loamy, well drained soil. Good drainage is important for most plants, and tomatoes are no exception. Pick up a handful of soil, if it will clump or form a loose ball without being watered, then it is good for gardening. Earth worms in the soil is another sign of fertile soil.

Pick varieties of tomatoes that you like.  Growing conditions are pretty much the same for all tomatoes.  I like for soil temperatures to be above 65°F when I plant.  There are all kinds of methods to get a jump on spring and plant early, but plants in the ground don’t do grow much until the soil warms up.

Personally, I like to buy plants in four packs. A four pack is much better than a six pack, as you have more root ball in a four pack.  You can buy larger plants but they offer little advantage.

For fertilizer I use plain old 10-10-10 for all of my garden and that in limited amounts. Too much fertilizer will give you excessive plant growth, but not necessarily increase your fruit yield. Plants don’t grow, set bloom, and fruit at the same time.

Water. How much and how often is a tough question to answer. Every garden is different. Rain, wind, clouds, sun, and daily temperatures all affect the need for water. The most productive garden I know of, the man never waters, fertilizes very little, doesn’t pay attention to disease or insects, and always has more tomatoes than he knows what to do with.

I use Sevin if you see a real need for an insecticide. It is an all purpose product and very safe. I don’t bother with fungicides, as diseases are so weather related that I don’t bother.

These are some general rules that I follow as they seem to work well for me.  As you can see, I am not into organics. OK if you want to, but it’s just not worth it for me.

Growing tomatoes in containers is much more demanding than growing in good old garden soil in the ground.  You have to be much more attentive to the crop.

Growing in raised beds or growing in a 5 gallon bucket would be the same.  A raised bed is just a large container. The main difference: a bucket or pot usually contains one plant, while a raised bed may contain a number of plants of several different varieties. All of which need to be tended, just a little different.  This section is going to assume that only tomatoes will be planted in the container.

Some types of tomatoes will work in fairly small containers, while others may need a larger pot. A small growing plant will do fine in a 3 gal pot while a larger growing variety might need a 5 gal pot. While pot size is not the most important consideration, you do want to make sure you have plenty of room for the root ball.

The most important item in container growing is the potting mix.  I would suggest using a commercial potting mix, and not trying to make your own.  I see customers prepare elaborate raised beds and then, because of cost, try to fill them up with top soil and a bag of peat moss mixed in in order to control cost, and then have little to no success with their crop. Drainage is critical in containers.  Usually homemade mixes are too heavy and hold water, which causes problems. For example, in a growing nursery when you put a gallon of water on a plant, you want it to run out the bottom in about 20 minutes.  Plants as a rule don’t like their roots to stay wet and tomatoes especially don’t like wet roots. This may mean daily watering, whereas in the ground watering once every two weeks, or maybe not at all is usually satisfactory.

Don’t over fertilize or over water. We had customers coming in the store on a regular basis bragging about what beautiful plants they had but they were not blooming, or setting any tomatoes. What was wrong? They were over fertilizing or over watering. The plant was so busy growing, it didn’t have time to bloom or fruit.

For insects I use Sevin, just as in the ground. Diseases, I don’t worry about. I try to water under the leaves. Never wet the leaves if you can avoid it. That causes disease. If you see signs of disease, you can use an all purpose fungicide. Usually sunshine and a light breeze will take care of most diseases.

If the fruit develops blossom end rot, buy a can of spray just for that problem. Normally one application will cure the problem.

I don’t sucker my tomato plants neither in the ground nor in containers. You can if you want. It lets in light and air, but may reduce your yield.

Lastly, when you see where I use a certain product, that does not make that product magic. I use it because it works, and I like it, but there are likely many other products on the market just as good. Use what you like.

Caring for your Mums 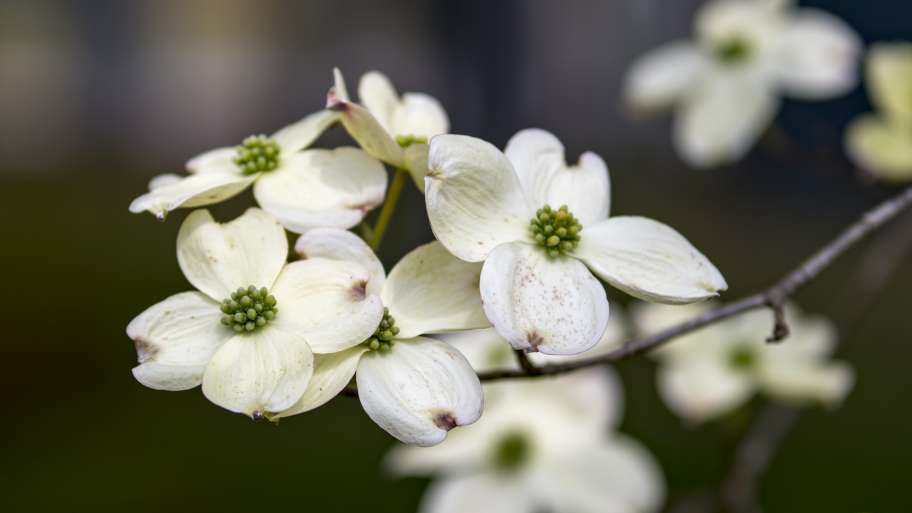